An article about us in
LA STAMPA 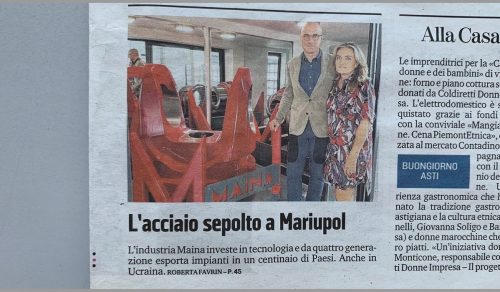 A steel giant made in Asti buried among the rubble of Mariupol.

In Mariupol there is a piece of Asti buried in the rubble of Azovstal, the steelworks symbolising resistance to the Russian invasion. 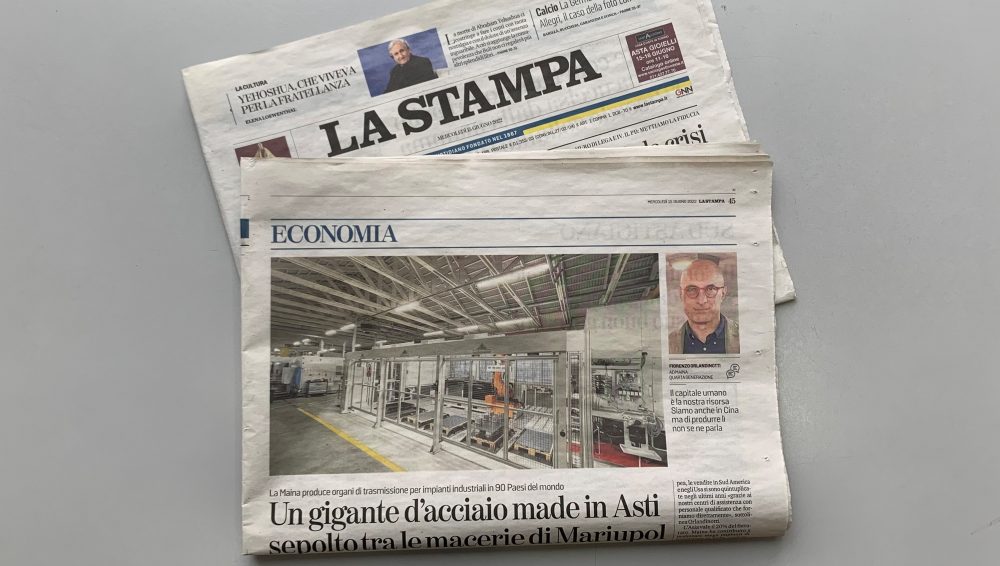 It is an 85-ton shaft made by Maina, the company of Corso Alessandria that since 1886 has been producing transmission parts for large industrial plants.

The steel group Metinvest based in Ukraine is a historical customer of the company from Asti. “In December we signed a new supply contract for the Mariupol site – reports the CEO of Maina, Fiorenzo Orlandinotti – no one expected what would happen from that moment on, even if the situation was not calm: in the meeting room the procedures to reach the shelter in case of bombing alarm were indicated.”

When the sirens actually did start to sound, Maina responded promptly to the call for help: “In the middle of the night, the phone call from our agent arrived, he was fleeing with his family and he needed us. We have provided him with all the support necessary to reach a safe place across the border,” says Orlandinotti.

Relations with the managers of Azovstal have not been interrupted in these months “but it will take years to get the steel mill back on its feet,” continues the CEO. However, the activity of Maina has not stopped, as it continues to export its steel giants to 90 countries around the world. A record for the family-run company that in an extreme niche market is competing with 5-6 international giants, whether German or Asian or American.

“We are accredited suppliers of steelmakers, and this opens the doors to us all over the world, where we are known and appreciated both for the initial plants and for the spare parts and maintenance services we offer,” explains Orlandinotti.

At his side is his wife Francesca Maina, who represents the fourth generation of the family of entrepreneurs and is the current Chairman of the Board of Directors.

“Our strengths are flexibility, originality and quality – explains the pair of managers – we exclusively use Italian suppliers and certified material produced in Europe. We design each system internally, adapting the piece to the customer’s specifications.”

Under the red brick vaults of the late nineteenth century, almost everything was once done by hand, including the cast iron manholes marked Fonderia Sant’Angeletta, still visible in the historic centre.

Now the workers (one hundred spread out over three shifts) operate numerically controlled lathes, mechanical arms and robots from the monitors. Thanks to new technologies, the company has managed to reach the peak of quality worldwide on some types of products. The latest 4.0 system is being assembled: “We invest a couple of million euro a year in technology and training,” highlights the owner.

Toothed wheels, universal joints and couplings, weighing from a few pounds to dozens of tons, start from Asti packed in wooden crates to travel thousands of kilometres, by sea or land. The turnover, about 40 million a year, is realised for 30% in the countries of the European Union, sales in South America and the USA have increased fivefold in recent years, “thanks to our service centres with qualified personnel that we provide directly,” Orlandinotti emphasises.

Asia is worth 20% of turnover. Maina has helped build mega irrigation systems in India, as well as mobile platforms for lifting ships. Recently, a commercial headquarters was opened in China, “but it is out of the question to manufacture there or away from home”, said Orlandinotti and Maina, proud and convinced of wanting to stay in the heart of the city.

“Human capital is our first resource – they say – the majority of employees leave us when they retire.” The production bonus has been paid for years, there are shopping vouchers, “stork” vouchers and in special cases of difficulty, financial assistance to employees is not spared. When you ask the CEO if he is worried about the rising cost of bills, the answer is by no means obvious: “I am much more concerned about our families, we will do our part to alleviate this situation, as much as possible.”